Find this article at:
go.ncsu.edu/readext?692954
— Written By Gene Fox

I responded to three such questions this week. I also found a few beneficial insects on my peaches this week, but they are still insects not to be reckoned with! 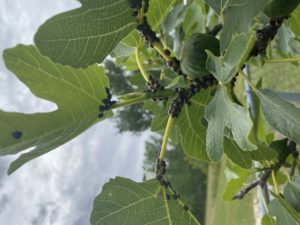 So far this spring, I have had three calls about these little ugly bugs that are on fig branches. One caller described them as little armored dots, another stated they were everywhere and she was sure they would kill her figs. The last caller thought they were stink bugs attacking her figs. Rest assured, oftentimes there is a threshold of damage that our plants can sustain without lasting harm or loss of production. In the case of kudzu bugs (Megacopta cribraria), it is better to get them off of the tree if possible but chances are, they will not do much harm to the tree, even in large numbers.

According to NC State Extension Specialist in Household & Structural Entomology, Mike Waldvogel, this insect tends to gather in large numbers on houses and other structures as well, becoming a real nuisance. Dominic Reisig, NC State University Professor and Extension Specialist in Entomology and Plant Pathology, states that kudzu bugs are a pest of agronomic crops too such as soybeans and other legumes. He recommends scouting crops on a regular basis and using thresholds for effective management of this pest.

If you come across them in your home garden you have two options. You can brush them off into a bucket of soapy water (two teaspoons liquid dish detergent to 1 gallon of water). Make certain not to squish them or handle them with bare hands because they do emit a toxin that can cause hands to welt and swell. Your second option is to use an insecticide such as a pyrethroid. Pyrethroids are formulations that have bifenthrin, permethrin, lambda-cyhalothrin or anything else ending in “-thrin” as the active ingredient. These are sold, quite literally, under thousands of trade names and are available at most any local hardware store. 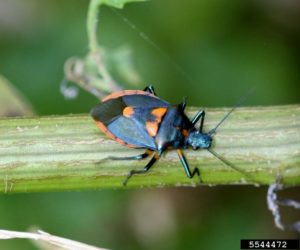 Always read the label of any chemical you are using in its entirety, wear the appropriate personal protective equipment, and apply the chemical as directed. Remember too, using an insecticide often harms beneficial insects leading to a spike in other plant pests such as spider mites. Beneficial insects that have been observed to prey on the kudzu bug are the assassin bug (Arilus cristatus) and the predatory stink bug (Euthyrhynchus floridanus). If you see these insects, think twice about spraying an insecticide! 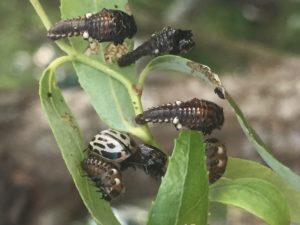 (Chrysomela scripta). These are insects that overwinter as adults, lay eggs, and then the larvae which pupate into adults. They had larvae in their flowers, bushes, and a corkscrew willow tree that will eat the leaves of the trees mostly and then disperse to other plants to pupate. These insects go by several names, two such aliases are the Cottonwood leaf beetle and the Poplar leaf beetle. Lady beetles are known to prey on these insects so be on the lookout for their help in controlling this pest. It is not recommended to use an insecticide on these beetles unless you have large numbers on a small tree. In such case, a pyrethroid as mentioned above will do the trick.

Now to talk about the insect I found on my peaches. This was a nymph of the 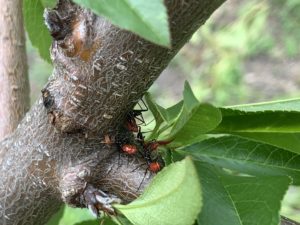 assassin or wheel bug. Although a welcomed visitor to my plants, I do not dare handle them! I understand the bite packs a wallop, being described as much worse than a wasp sting. The wheel bugs I found were still in one of the five nymphal stages of development.

If you have an insect in your plants or yard, email me a picture and we can get down to the bottom of it. Knowing if it is beneficial or problematic and what to do about it is key in controlling pests.